As the first public asset manager to gain exposure to bitcoin at $250 through the Bitcoin Investment TrustGBTC,1 ARK Invest faced a number of questions and much ridicule in September 2015. Given our research-based conviction, and the knee-jerk reaction of skeptics, we knew we were on to something big!

Ending a near cataclysmic slide from roughly $1,250 in November 2013 to $175 in January 2015, bitcoin’s price stabilized around its 200-week moving average for the next nine months, as shown by the green line below. At that time, the European sovereign debt crisis was reverberating as Greece threatened to leave the European Union, providing bitcoin with a mid-summer bump. Bitcoin’s price action during those nine months suggested that its ecosystem was much more robust than professionals in traditional asset management were willing to acknowledge. If nothing else, technicians were paying attention, so moving averages, resistance and support, and gaps were relevant. 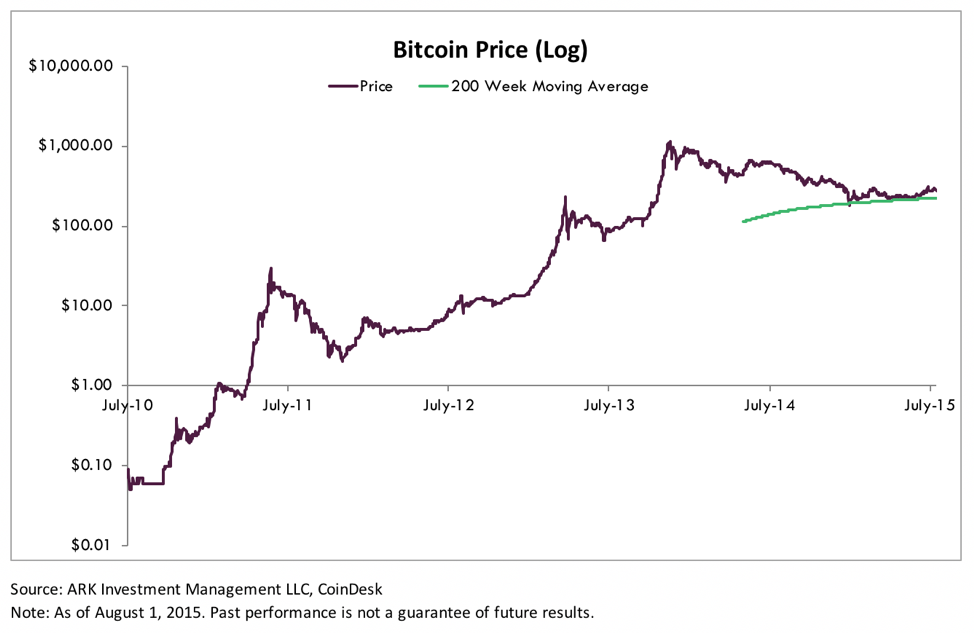 Despite the recent plunge in bitcoin’s price from nearly $20,000 in December 2017 to less than $10,000 as of February 6, 2018, we remain convinced that bitcoin is the first of its kind in a new asset class, cryptoassets, and one that is here to stay. During the past three years, cryptoassets have scaled past $500 billion in network value, with bitcoin now accounting for roughly a third of an ecosystem comprised of more than 1500 cryptocurrencies, cryptocommodities, and cryptotokens. Born out of the convergence of technology, financial services, economics, and other social sciences, we believe this new asset class presents a daunting challenge to professionals in each of those fields, not to mention the investing public.

Bitcoin has overcome a number of battle tests during the last few years, as shown below by the fluctuations in its price.  Following the graph is a list of the most important among those tests, representing ARK’s “aha moments”.

If technicians and global macro traders are dominating trading activity now as they did in 2015, then the price of bitcoin could test a number of different technical levels ranging from $6,400 to $1,700…and still be in a bull market! I am not a technician but have learned their ways as they have influenced the behavior of stocks in our portfolios during major turning points in the market. Among the levels of bitcoin’s technical support, depicted on the graphs below and rounded to the nearest hundred, are the following:

If bitcoin is leading the way to a new asset class, then we believe these price points are nothing more than psychological supports and will pale in comparison to its ultimate destination. We believe the price will bottom when buyers return and overcome or overwhelm sellers. Adding to our confidence in the outlook for bitcoin are the numbers of developers and lines of code they are contributing to the community, not to mention the much anticipated and rapidly expanding Lightning Network.  As long as they are on board for the ride, so are we!

Cover Image: Uploaded by energepic.com is licensed under CC BY 2.0

Disclosure
ARK’s statements are not an endorsement of any company or a recommendation to buy, sell or hold any security. For a list of all purchases and sales made by ARK for client accounts during the past year that could be considered by the SEC as recommendations, click here. It should not be assumed that recommendations made in the future will be profitable or will equal the performance of the securities in this list. For full disclosures, click here.